At a glance used  for - Immune defence - Liver Help - Cholesterol Reduction
Lecithin is found in many animal and vegetable sources, including beef liver, steak, eggs, peanuts, cauliflower, and oranges. Commercial sources for lecithin may come from soybeans, egg yolk, or brain tissue.
Scientific names: 1,2-diacyl-sn-glycero-3-phosphatidylcholine
Common names: Lecithin also is known as lecithol, vitellin, kelecin, and granulestin.
Lecithin is the common name for a series of related compounds called phosphatidylcholines. Lecithin is a phospholipid mixture of phosphatides consisting mainly of phosphatidylcholine, phosphatidyl ethanolamine, phosphatidyl serine, phosphatidyl inositol combined with various other substances, including fatty acids and carbohydrates. Lecithins also contain phosphorous and nitrogenous (eg, choline) compounds.
How is it Used
Lecithin originated from the Greek “Lekithos,” referring to egg yolk. Lecithin is a common compound found in cells of all living organisms, its presence is required for proper biological function.
It also is an edible and digestible surfactant and emulsifier. Lecithin is used as an emulsifying and stabilizing agent in the food (eg, margarine, chocolate production),Pharmaceutical  and cosmetic (eg, creams, lipsticks, conditioners) industries.
Neurological conditions
Pharmacological use of lecithin includes treatment for neurologic disorders and dementias. Lecithin is a good source of choline for treatment in dementias. Phosphatidylcholine is thought to be a precursor for acetylcholine (Ach) synthesis. Choline increases the accumulation of Ach within the brain. Ach is important for many brain functions including memory, so increasing concentration of this neurotransmitter may result in improved memory. Variable results occur using lecithin supplementation for treatment of neurologic disorders.
Liver/Cholesterol effects
Lecithin also is used to treat liver ailments and hypercholesterolemia. The mechanism appears to be enhancement of cholesterol metabolism in the digestive system. Lecithin seems to possess beneficial properties in reducing cholesterol levels and controlling or preventing atherosclerosis. However, studies from the late 1970s to early 1980s provide insufficient clinical or epidemiologic evidence to entirely support its positive effects against atherosclerosis. Although other studies from this time appear promising, no study was definitive with respect to atherosclerosis progression.

Buy Lecithin - From Holland and Barrett

Other uses
It also has been used to modify the immune system by activating specific and nonspecific defense systems. Clinical studies need to be performed to verify this use.

How safe is it?

Contraindications
Contraindications have not yet been identified.
Pregnancy/nursing
Information regarding safety and efficacy in pregnancy and lactation is lacking.
Interactions
None well documented.
Side Effects
Adverse effects usually are not associated with lecithin. However, there have been reports of anorexia, nausea, increased salivation, other GI effects, and hepatitis.
Toxicities
Research reveals little or no information regarding toxicology with the use of this product.
References
Wikipedia

Lecithin is a generic term to designate any group of yellow-brownish fatty substances occurring in animal and plant tissues composed of phosphoric acid,choline, fatty acids, glycerol, glycolipids, triglycerides, and phospholipids (e.g.,phosphatidylcholine, phosphatidylethanolamine, and phosphatidylinositol).
Lecithin was first isolated in 1846 by the French chemist and pharmacist Theodore Gobley. In 1850, he named the phosphatidylcholine léchithine. Gobley originally isolated lecithin from egg yolk—λέκιθος lekithos is "egg yolk" in Ancient Greek—and established the complete chemical formula of phosphatidylcholine in 1874; in between, he had demonstrated the presence of lecithin in a variety of biological matters, including venous blood, bile, human brain tissue, fish eggs, fish roe, and chicken and sheep brain.
Lecithin can easily be extracted chemically (using hexane, ethanol, acetone,petroleum ether, benzene, etc.) or mechanically. It is usually available from sources such as soybeans, eggs, milk, marine sources, rapeseed, cottonseed, and sunflower. It has low solubility in water, but is an excellent emulsifier. In aqueous solution, its phospholipids can form either liposomes, bilayer sheets, micelles, or lamellar structures, depending on hydration and temperature. This results in a type of surfactant that usually is classified as amphipathic. Lecithin is sold as a food supplement and for medical uses. In cooking, it is sometimes used as an emulsifier and to prevent sticking, for example in nonstick cooking spray. 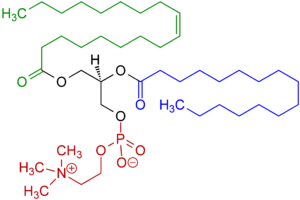 Lecithin, as a food additive, is also dietary source of several active compounds: Choline and its metabolites are needed for several physiological purposes, including cell membrane signaling and cholinergic neurotransmission, and is a major source for methyl groups via its metabolite, trimethylglycine (betaine). Phosphatidylcholine occurs in all cellular organisms, being one of the major components of the phospholipid portion of the cell membrane.


While lecitihin is also a rich source of a variety of types of dietary fats, the small amounts of lecithin typically used for food additive purposes mean it is not a significant source of fats.

Commercial lecithin, as used by food manufacturers, is a mixture of phospholipids in oil. The lecithin can be obtained by water degumming the extracted oil of seeds. It is a mixture of various phospholipids, and the composition depends on the origin of the lecithin. A major source of lecithin is soybean oil. Because of the EU requirement to declare additions of allergens in foods, in addition to regulations regarding genetically modified crops, a gradual shift to other sources of lecithin (e.g., sunflower oil) is taking place. The main phospholipids in lecithin from soya and sunflower are phosphatidyl choline, phosphatidyl inositol, phosphatidyl ethanolamine, and phosphatidic acid. They often are abbreviated to PC, PI, PE, and PA, respectively. Purified phospholipids are produced by companies commercially.

To modify the performance of lecithin to make it suitable for the product to which it is added, it may be hydrolysed enzymatically. In hydrolysed lecithins, a portion of the phospholipids have one fatty acid removed by phospholipase. Such phospholipids are called lysophospholipids. The most commonly used phospholipase is phospholipase A2, which removes the fatty acid at the C2 position of glycerol. Lecithins may also be modified by a process called fractionation. During this process, lecithin is mixed with an alcohol, usually ethanol. Some phospholipids, such as phosphatidylcholine, have good solubility in ethanol, whereas most other phospholipids do not dissolve well in ethanol. The ethanol is separated from the lecithin sludge, after which the ethanol is removed by evaporation to obtain a phosphatidylcholine-enriched lecithin fraction.

Genetically modified crops as a source of lecithin

As described above, lecithin is highly processed. Therefore, genetically modified (GM) protein or DNA from the original GM crop from which it is derived often is undetectable – in other words, it is not substantially different from lecithin derived from non-GM crops. Nonetheless, consumer concerns about genetically modified food have extended to highly purified derivatives from GM food, such as lecithin. This concern led to policy and regulatory changes in the European Union in 2000, when Commission Regulation (EC) 50/2000 was passed which required labelling of food containing additives derived from GMOs, including lecithin. Because it is nearly impossible to detect the origin of derivatives such as lecithin, the European regulations require those who wish to sell lecithin in Europe to use a meticulous system of identity preservation

Lecithin has emulsification and lubricant properties, and is a surfactant. It can be totally metabolized (see Inositol) by humans, so is well tolerated by humans and nontoxic when ingested; some other emulsifiers can only be excreted via the kidneys.


The major components of commercial soybean-derived lecithin are:[8]

The non toxicity of lecithin leads to its use with food, as an additive or in food preparation. It is used commercially in foods requiring a natural emulsifier or lubricant.


In confectionery, it reduces viscosity, replaces more expensive ingredients, controls sugar crystallization and the flow properties of chocolate, helps in the homogeneous mixing of ingredients, improves shelf life for some products, and can be used as a coating. In emulsions and fat spreads, it stabilizes emulsions, reduces spattering during frying, improves texture of spreads and flavour release. In doughs and bakery, it reduces fat and egg requirements, helps even distribution of ingredients in dough, stabilizes fermentation, increases volume, protects yeast cells in dough when frozen, and acts as a releasing agent to prevent sticking and simplify cleaning. It improves wetting properties of hydrophilic powders (e.g., low-fat proteins) and lipophilic powders (e.g., cocoa powder), controls dust, and helps complete dispersion in water. Lecithin keeps cocoa and cocoa butter in a candy bar from separating. It can be used as a component of cooking sprays to prevent sticking and as a releasing agent. In margarines, especially those containing high levels of fat (>75%), lecithin is added as an 'antispattering' agent for shallow frying.


Lecithin is approved by the United States Food and Drug Administration for human consumption with the status "generally recognized as safe". Lecithin is admitted by the EU as a food additive, designated as E322. Research studies show soy-derived lecithin has significant effects on lowering serum cholesterol and triglycerides, while increasing HDL ("good cholesterol") levels in the blood of rats

Because it contains phosphatidylcholines, lecithin is a source of choline, an essential nutrient. Clinical studies have shown benefit in acne, in improving liver function, and in lowering cholesterol, but clinical studies in dementia and dyskinesias have found no benefit. An earlier study using a small sample (20 men divided in 3 groups) did not detect statistically significant short term (2-4 weeks) effects on cholesterol in hyperlipidaemic men.

Posted by Defender LandRover at 11:23