Pine pollen is a nutritional powerhouse. With everything in it combined you may find some of these incredible benefits. According to Chinese medicine, pine pollen enters through the five major meridians including the lungs, kidneys, spleen, heart and liver.
Buy This Product

Like chorella, pine pollen has a hard shell on it. If this is not broken then the nutrition that is found in pine pollen will not be readily available to your body.
Our pine pollen is processed through a low temperature and high speed airflow sporoderm-breaking technology, leaving 99% of the pine pollen with the cell walls broken, with sizes of around 1 to 2 micrograms and thus available to your body.
Pine pollen has over 200 bioactive vitamins, minerals, amino acids, antioxidants and other super nutrients in every single serving. It is a wild-harvested super food with no added chemicals or preservatives.

Pine Pollen Testosterone and a Rare Source of Phyto-Androgens

These can help combat all those phyto and xeno-estrogens are our environment is full of these days, from drinking water, pesticides, plastics and more. This includes:
This is not a steroid and you won’t have any side effects of those drugs. Instead with all the natural co-factors and the small amounts these will work with your body for adaptogenic effects. These are provided through novel plant compounds like Gibberellins and Brassinosteroids, which bind to testosterone receptors sites, regulate prostrate health, have anti-inflammatory, liver detoxifying actions and much more.
For more of the anabolic effects you’ll want to get the Pine Pollen Tincture. This is best for bodybuilding with pine pollen.

It is a complete protein source as it contains seven of of the essential amino acids (they are bolded below). In fact pine pollen is about 30% protein.

Pine Pollen is Full of Vitamins

Pine Pollen is Full of Minerals

Pine Pollen also has Much More

The Pine Pollen is collected from the mountainous regions of China, from pristine and unpolluted locations. The pollen is wild harvested then processed at very low temperatures to crack the cell wall of the pollen, producing a superior product that is over 99% digestible. The date on the package is a packaging date, not expiration. No need for refrigeration. Store in a cool, dry place and pine pollen will stay potent for up to a year once opened.

Posted by Defender LandRover at 13:21

Bioglan Red Krill Oil 1000mg contains pure krill oil sourced from the pristine waters of the Antarctic Ocean and is fully traceable and sustainable as certified by the Marine Stewardship Council (MSC). DHA Helps support:? Brain Health? Eye HealthKrill oil is more efficient than many other sources of Omega-3s. The unique composition of krill oil is phospholipid bound which means it can contribute to better absorption and utilisation of the EPA and DHA by the body?s cells.

Contains crustacean.
From shellfish. Do not take if allergic to shellfish. Do not exceed recommended dose Not to be taken on an empty stomach.
Food supplements should not replace a balanced diet or healthy lifestyle. Keep out of sight and reach of children.
Posted by Defender LandRover at 13:03

Email ThisBlogThis!Share to TwitterShare to FacebookShare to Pinterest
Labels: Krill

Bioglan Superfoods Supergreens provides more than your 5 a day per serve! Each serving is equivalent to 10 portions of fruit and vegetables. Packed with over 81 vital ingredients which provide the full spectrum of A-Z nutrients derived from supergreens, superfoods, fruits, vegetables, herbs and live cultures. Plus it has a delicious natural tropical flavour.

Store in a cool dry place away from direct sunlight. Do not use if tamper evident seal is broken.

Always read the label.
Posted by Defender LandRover at 12:50

An introduction to beetroot

Like many modern vegetables, beetroot was first cultivated by the Romans. By the 19th century it held great commercial value when it was discovered that beets could be converted into sugar. Today, the leading commercial producers include the USA, Russia, France, Poland and Germany. Many classic beetroot recipes are associated with central and Eastern Europe including the famous beetroot soup known as borscht. Beetroot's earthy charm has resulted in its ubiquitous influence on fashionable menus and recipes. Its delicious but distinctive flavour and nutritional status have escalated it to the root you can't beat!
Belonging to the same family as chard and spinach, both the leaves and root can be eaten - the leaves have a bitter taste whereas the round root is sweet. Typically a rich purple colour, beetroot can also be white or golden. Due to its high sugar content, beetroot is delicious eaten raw but is more typically cooked or pickled. 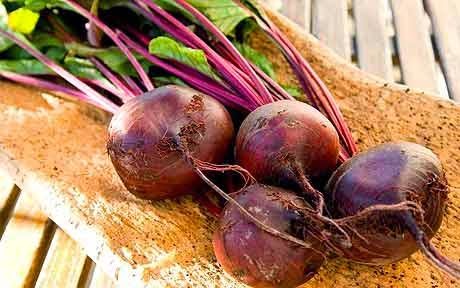 Beetroot is of exceptional nutritional value; especially the greens, which are rich in calcium, iron and vitamins A and C. Beetroots are an excellent source of folic acid and a very good source of fibre, manganese and potassium. The greens should not be overlooked; they can be cooked up and enjoyed in the same way as spinach.

A history of health

Beetroots have long been used for medicinal purposes, primarily for disorders of the liver as they help to stimulate the liver's detoxification processes. The plant pigment that gives beetroot its rich, purple-crimson colour is betacyanin; a powerful agent, thought to suppress the development of some types of cancer.
Beetroot is rich in fibre, exerting favourable effects on bowel function, which may assist in preventing constipation and help to lower cholesterol levels too.
Beetroot fibre has been shown to increase the level of antioxidant enzymes in the body, (specifically one called glutathione peroxidase), as well as increase the number of white blood cells, which are responsible for detecting and eliminating abnormal cells. Beets are also one of the richest sources of glutamine, an amino acid, essential to the health and maintenance of the intestinal tract.
Other studies have looked at the effect of beetroot juice on blood pressure. A reduction in blood pressure is beneficial for the avoidance of heart disease and stroke. Studies state that nitrate rich foods like beetroot may help in heart attack survival.
Beetroot juice has gained popularity since Paralympic gold medalist David Weir announced that a shot of the juice was his secret to success
Information Source BBC
-- Other Information

Researchers have known for some time that juice may help lower blood pressure, but in 2010 UK researchers revealed that nitrate is the special ingredient in beetroot which lowers blood pressure and may help to fight heart disease.
In a Queen Mary University of London study, healthy participants had to drink a glass of beetroot juice while others had a dummy (placebo) drink. Others took nitrate tablets.
Blood pressure was lowered within 24 hours in people who took nitrate tablets and those who drank beetroot juice.
The researchers admitted to Boots WebMD that beetroot juice is a love it or hate it kind of drink, but found people in the study didn't mind it so much when they were drinking it every day.
People with very high blood pressure can end up being on multiple tablets, so a more natural approach could prove popular if the initial research results are confirmed.
The study was funded by the British Heart Foundation and published online in the American Heart Association journal Hypertension..

Beetroot for the brain and dementia

Drinking beetroot juice increases blood flow to the brain in older people, which may be able to fight the progression of dementia, a 2010 study suggested.
Beetroot contains high concentrations of nitrates, which are converted into nitrites by bacteria in the mouth. Nitrites help open blood vessels in the body, increasing blood flow and oxygen to places lacking in oxygen.
Previous studies have shown that nitrites widen blood vessels, but US researchers writing in Nitric Oxide: Biology and Chemistry, the peer-reviewed journal of the Nitric Oxide Society, say theirs was the first to find that nitrites also increase blood flow to the brain.
Wikipedia
The beetroot is the taproot portion of the beet plant, also known in North America as the table beet, garden beet, redor golden beet, or informally simply as the beet. It is several of the cultivated varieties of beet (Beta vulgaris) grown for their edible taproots and their greens. These varieties have been classified as B. vulgaris subsp. vulgaris ConditivaGroup.
Other than as a food, beets have use as a food coloring and as a medicinal plant. Many beet products are made from other Beta vulgaris varieties, particularly sugar beet.

Beetroot is an excellent source of folate and a good source ofmanganese, and contains betaines which may function to reduce the concentration of homocysteine, a homolog of the naturally occurring amino acid cysteine. High circulating levels of homocysteine may be harmful to blood vessels and thus contribute to the development of heart disease, stroke, or peripheral vascular disease This hypothesis is controversial as it has not yet been established whether homocysteine itself is harmful or is just an indicator of increased risk for heart disease.

The red colour compound betanin is not broken down in the body, and in higher concentrations may temporarily cause urine and stool to assume a reddish colour; in the case of urine this is called beeturia. This effect may cause distress and concern due to the visual similarity to hematuria (blood in the urine) or blood in the stool, but is completely harmless and will subside once the food is out of the system.

Posted by Defender LandRover at 03:04