The potential benefits of dandelion include:

Antioxidants work to neutralize the harmful effects of free radicals. The human body produces free radicals naturally, but they cause harm by accelerating ageing or the progression of certain diseases.
Dandelions contain beta-carotene, which is an antioxidant that helps protect cells from damage. Research shows that carotenoids such as beta-carotene play a vital role in reducing cell damage.
The flower of the dandelion is also full of polyphenols, which are another type of antioxidant.

There is some evidence to suggest that dandelions contain compounds that may help with regulating blood sugar.
In 2016, some researchers proposed that dandelion’s antihyperglycemic, antioxidative, and anti-inflammatory properties may help treat type 2 diabetes. However, further research is required to make any definitive claims.

Some studies indicate that dandelion extracts and compounds may help reduce inflammation in the body.
In one 2014 study, researchers found that chemicals present in dandelions had some positive effects on reducing inflammatory responses.
They conducted the study in cells and not in human participants, which means that more studies are necessary to conclude that dandelion reduces inflammation in the human body.

There is little research to support the use of dandelion for lowering blood pressure.
However, dandelions are a good source of potassium. There is clinical evidence that shows that potassium can help reduce blood pressure.
For example, research has found that people taking a potassium supplement saw a reduction in their blood pressure, especially if they already had high blood pressure.

Some researchers have proposed that dandelion could help people achieve their weight loss goals. This is based on the plant’s ability to improve carbohydrate metabolism and reduce fat absorption.
A small study of mice found that chlorogenic acid, a chemical present in dandelions, may help reduce weight gain and lipid retention. Strong evidence to support this claim is lacking, however.

Some limited, but positive, research has indicated that dandelion may help reduce the growth of certain types of cancer.
So far, studies have looked at dandelion’s impact on cancer growth in test tubes and found that it may help with slowing the growth of colon cancer, pancreatic cancer, and liver cancer.
One study examining cancer growth in a test tube determined that dandelion extract may help reduce the growth of liver cancer.
However, as with other potential benefits, more research is required to show how effective dandelions can be as part of cancer treatment.

Some people use dandelion as a traditional remedy for constipation and other digestion issues.
A study looking at animal digestion indicated that some chemicals present in dandelions helped improve the digestive system.
The study saw a reduction in the resistance in food moving to rodents’ small intestines. Research is now needed on humans to test for similar results.

Some research indicates that dandelion may help protect the skin from sun damage.
Ultraviolet (UV) light causes considerable damage to the skin and contributes to skin ageing. A 2015 study on skin cells in a test tube found that dandelion could reduce the impact of one type of damaging UV light.
Protecting the skin from UV damage can help a person look younger for longer. Research in humans is needed to verify these results.

Dandelion leaves are sometimes present in salads, but they are not widely available in all areas. Picking dandelions in a backyard is unsafe due to the potential presence of pesticides or animal excrement.
However, it is possible to obtain dandelion supplements or teas and coffees infused with dandelion root. The United States Food and Drug Administration (FDA) have recognized dandelion as generally being safe to include in food products.
Data on safe doses of dandelion supplements are limited. Similar to other supplements, its potency and effectiveness can vary widely between manufacturers.
Dandelion supplements can cause allergic reactions in some people. People should not use dandelion supplements if they are sensitive to dandelions or certain other plants, such as ragweed, daisies, or chrysanthemums, or marigolds.
People trying supplements should follow instructions on the bottle for recommended doses and always speak to a doctor before taking them.
Posted by All About London at 04:13

Email ThisBlogThis!Share to TwitterShare to FacebookShare to Pinterest
Labels: Dandelions

WHAT IS ORGANIC MORINGA POWDER?

BULK POWDERS™ Organic Moringa Powder is a 100% pure source of this popular product.
The Moringa tree is native to tropical and subtropical climates such as India and Africa, and has been used in Ayurvedic medicine for thousands of years. The leaves and pods of the tree contain a host of vitamins, minerals and nutrients, and for this reason it is nicknamed the ‘Miracle Tree’ – and often referred to as 'Nature's Multivitamin'.
BULK POWDERS™ Organic Moringa Powder is a raw wholefood made from dried leaves of the Moringa tree. The leaves are packed with 13 vitamins and minerals and contain over 27% protein and 19% fibre – making it the perfect addition to any diet. Importantly, during the manufacturing process, no additives or heat are used, ensuring that BULK POWDERS™ Organic Moringa Powder is not only 100% pure, but also retains all the nutrients of the raw leaves.
Organic Moringa Powder has a slight herby taste and therefore combines well with savoury foods or other greens and vegetables – think of it as a ‘superfood seasoning’, which can be added to other foods to increase flavour and nutrition. For example, it would make a great addition to Complete Greens™.

WHO IS ORGANIC MORINGA POWDER SUITABLE FOR? 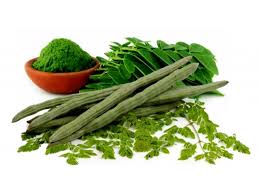