Could turmeric really boost your health?

Bold health claims have been made for the power of turmeric. Is there anything in them, asks Michael Mosley.
Turmeric is a spice which in its raw form looks a bit like ginger root, but when it's ground down you get a distinctive yellowy orange powder that's very popular in South Asian cuisine. Until recently the place you would most likely encounter turmeric would be in chicken tikka masala, one of Britain's most popular dishes.
These days, thanks to claims that it can improve everything from allergies to depression, it's become incredibly trendy, not just cooked and sprinkled on food but added to drinks like tea. Turmeric latte anyone?
Now I'm usually very cynical about such claims, but in the case of turmeric I thought there could be something to it. There are at least 200 different compounds in turmeric, but there's one that scientists are particularly interested in. It gives this spice its colour. It's called curcumin.
Thousands of scientific papers have been published looking at turmeric and curcumin in the laboratory - some with promising results. But they've mainly been done in mice, using unrealistically high doses. There have been few experiments done in the real world, on humans. 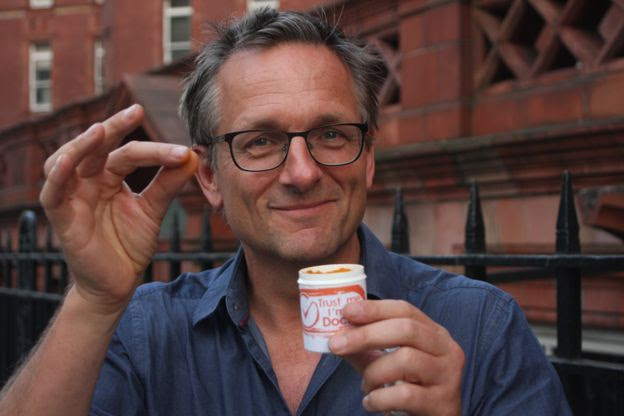 Find out more about the experiment
This is exactly the sort of situation where we on Trust Me like to make a difference. So we tracked down leading researchers from across the country and with their help recruited nearly 100 volunteers from the North East to do a novel experiment. Few of our volunteers ate foods containing turmeric on a regular basis.
Then we divided them into three groups.
We asked one group to consume a teaspoon of turmeric every day for six weeks, ideally mixed in with their food. Another group were asked to swallow a supplement containing the same amount of turmeric, and a third group were given a placebo, or dummy pill.
The volunteers who were asked to consume a teaspoon of turmeric a day were ingenious about what they added it to, mixing it with warm milk or adding it to yoghurt. Not everyone was enthusiastic about the taste, with comments ranging from "awful" to "very strong and lingering".
But what effect was eating turmeric having on them? We decided to try and find out using a novel test developed at University College, London, by Prof Martin Widschwendter and his team.
Prof Widschwendter is not particularly interested in turmeric but he is interested in how cancers start. His team have been comparing tissue samples taken from women with breast cancer and from women without it and they've found a change that happens to the DNA of cells well before they become cancerous.
The change is in the "packaging" of the genes. It's called DNA methylation. It's a bit like a dimmer switch that can turn the activity of the gene up or down.
The exciting thing is that if it is detected in time this change can, potentially, be reversed, before the cell turns cancerous. DNA methylation may explain why, for instance, your risk of developing lung cancer drops dramatically once you give up smoking. It could be that the unhealthy methylation of genes, caused by tobacco smoke, stops or reverses once you quit.
So we asked Prof Widschwendter whether testing the DNA methylation patterns of our volunteers' blood cells at the start and end of the experiment would reveal any change in their risk of cancer and other diseases, like allergies. It was something that had not been done before.

Turmeric recipes from BBC Food
Fortunately he was very enthusiastic. "We were delighted," he said, "to be involved in this study, because it is a proof of principle study that opens entirely new windows of opportunity to really look into how we can predict preventive measures, particularly for cancer."
So what, if anything, happened?
When I asked him that, he pulled out his laptop and slowly began to speak.
"We didn't find any changes in the group taking the placebo," he told me. That was not surprising.
"The supplement group also didn't also show any difference," he went on.
That was surprising and somewhat disappointing.
"But the group who mixed turmeric powder into their food," he continued, "there we saw quite substantial changes. It was really exciting, to be honest. We found one particular gene which showed the biggest difference. And what's interesting is that we know this particular gene is involved in three specific diseases: depression, asthma and eczema, and cancer. This is a really striking finding."
It certainly is. But why did we see changes only in those eating turmeric, not in those taking the same amount as a supplement?
Dr Kirsten Brandt, who is a senior lecturer at Newcastle University and who helped run the experiment, thinks it may have something to do with the way the turmeric was consumed.
"It could be," she told me, "that adding fat or heating it up makes the active ingredients more soluble, which would make it easier for us to absorb the turmeric. It certainly gives us something, to work on, to try to find out exactly what's happening."
She also told me, because our volunteers all tried consuming their turmeric in different ways, that we can be confident it was the turmeric that was making the difference and not some other ingredient used to make, say, chicken tikka masala.
There is a lot more research that needs to be done, including repeating the experiment to see if these findings can be confirmed. But in light of what we've discovered will I be consuming more of the stuff? Probably. It helps that I like the taste and I've already begun experimenting with things like adding it with a touch of chilli to an omelette.
Buy Tumeric Products From Healthspan
Buy Tumeric Products - Holland and Barrat
Posted by All About London at 04:05